Gig 13, a digital illustration of anything I want

Last week I ordered a favicon for the site made from our logo. I thought the result looked like a red duck pointing a green ray gun at the sky. While browsing fiverr I came across Spacegnome, who will create a digital illustration of anything you want. When I saw his gig I got a flash of genius (or madness, it’s always hard to tell the difference)!  I knew he could create what I needed. 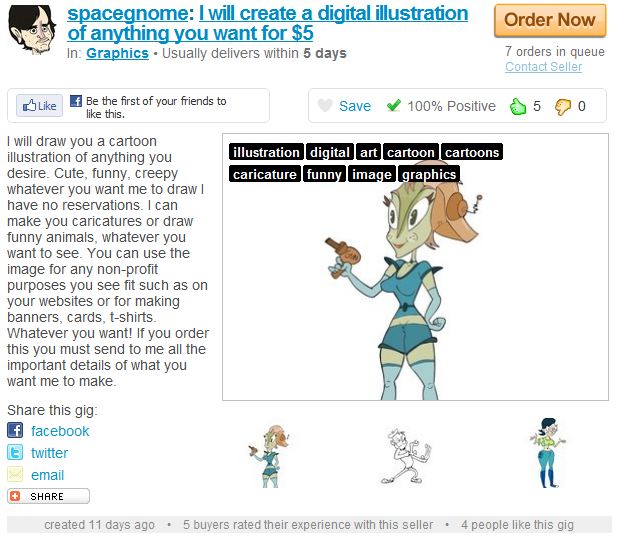 Message sent to the seller:﻿﻿Hi Spacegnome! Awesome picture of the alien with a raygun!‘I just ordered a favicon, for my site http://fiverroftheday.com , made from my logo, it was a tricky logo but the favicon turned out ok. The favicon is attached. The funny thing about the little favicon (which is supposed to be a red “5” with some green stuff on it”) is that it kind of looks like a red duck pointing a green ray gun at the sky. When I saw your picture of the alien with the ray gun I thought “I want a red duck with a green ray gun as a logo”. I would like for you to draw a red duck with a green ray gun. The red duck should look like the number 5 (like, if you squint your eyes, it almost looks the same). It’s important that the duck looks kind of like our original logo, the “5”. I can’t stress this enough. The Red duck would replace our current logo so it’s important that they are similar. I would hate to replace the favicon afterwards, as I have invested heavily in it.Best regardsToreAttached file:

I present to you, the latest addition to the work force at fiverr of the day;The red duck of awesomeness: 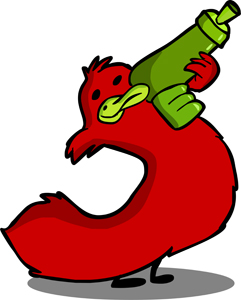 This duck will replace the “5” in the logo. He have earned it.I really like that the duck, shrunked to 16×16 pixels, looks like our favicon:

Isn’t that great or what?

This entry was posted in Gigs. Bookmark the permalink.